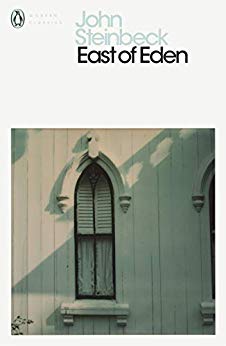 The biblical stories of Adam & Eve and Cain & Abel have been reinterpreted multiple times in modern literature. East of Eden – first published in 1952 – is Nobel prize winning author John Steinbeck’s attempt. At more than 600 pages, it is one of his longest books and in his own words – the sum total of his life’s work. The novel tells the story of two families – Trasks and Hamiltons – over two generations and plays out across the East and West coast of the US. The title itself is taken from the biblical reference: Then Cain went away from the presence of the LORD and settled in the land of Nod, east of Eden(Genesis 4:16).

While the book really tells the story of the Trasks, Steinbeck uses the Hamilton characters at important junctures to shape the story. This is an intense book with intense characters; the story itself is simple enough but is interspersed with biblical references and philosophical discussions. Elements of the story of Cain and Abel seem to play out twice in the book – once in the form of Charles and Adam Trask and then in the form of Caleb and Aaron Trask – Adam’s children with Cathy Ames. The whole book revolves around Cathy – which is probably one of the darkest characters I have come across. She has no shades of grey – she is pure evil. Outside the Trask family, the characters of Sam Hamilton as the wise advisor, Lee, Adam Trask’s Chinese servant and Abra, Aaron’s girlfriend are the other key characters. Lee in particular has been developed very well and his second generation immigrant anxieties are hilarious and tragic in equal measure.

The one message of the book is – nobody is inherently good or evil and that we really make an active choice. The device Steinbeck uses to convey this message – the discussions held between Sam Hamilton, Lee and Adam Trask during the naming of his two sons -is scarcely realistic or believable but no less effective for that. Those discussions are really the highlight of the book and what really brings it all together – with the punchline being delivered on the last page of the book by a dying Adam Trask.

The book has been adapted into a movie and a TV series. I followed up the book with watching 1955 movie East of Eden directed by Elia Kazan. The movie deals with just half the story, that is the second generation of Caleb & Aaron Trask. Characters have had to be fused together or eliminated (there is no Lee or Sam Hamilton or Charles Trask) to fit into the under 2 hour running-time, but incredibly the movie remains true to the message and is a marvel of screenplay adaptation. James Dean plays the role of Caleb Trask and along with his role in Rebel Without a Cause, released the same year made him America’s cultural icon. He tragically died in a car crash within 6 months of the film’s release and remains the only actor to be nominated for a posthumous academy award. The movie received 3 other oscar nominations; Jo Van Fleet won the oscar for her portrayal of Cathy.

On the overall, I thoroughly enjoyed my East of Eden experience. I would recommend watching the movie after reading the book, though keep in mind the movie was made in 1955 and acting styles are distinctly over dramatized.