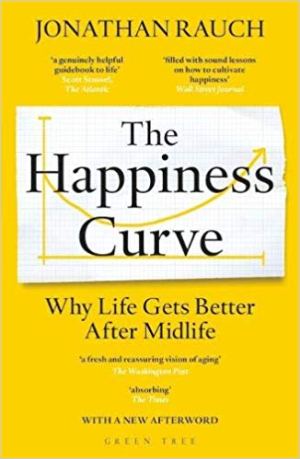 Over the last few years happiness seems to be in vogue. There are dozens of books providing self-help advice on how to be happy. Everything from “letting go” to “seizing the moment” is prescribed. Most of these are quite shallow – filling out a few hundred pages by repeating the same single theme multiple times in multiple examples. The Happiness Curve is a little different in that it focusses specifically on how Happiness is correlated with age. It’s key hypothesis is that we are biologically wired to be get unhappier as middle age approaches. This trend reverses as retirement age approaches and hence the ‘curve’ in the title. It does spend some time in prescribing ‘solutions’ but it’s real value is in illustrating how wide spread and universal the phenomenon is.

The author draws on academic research in psychology, anthropology and even zoology to lay out his central theme. Survey after survey measuring life satisfaction metrics display a steady, almost smooth decline in Happiness levels as youth turns into middle age before it curves up again in the fifties. This is true across geographies and socio-economic classes. He then provides some theories on what causes this phenomenon and offers advice to cope with it. This is a confusing phase for some because outwardly there is often no reason for unhappiness. Individuals with successful careers and settled families and good health also seem to be experiencing a dip in their happiness levels.

What I found more interesting than the underlying causes was the discussion on society’s response to what is so widely observed and experienced. The author is at pains to emphasise that midlife crisis is not the right descriptor for this phenomenon and society’s caricature in the form of jokes based on red racing cars or office affairs is not very helpful or accurate. At one point, he suggests the midlife changes that an individual undergoes are as profound as those experienced during adolescence. And yet, society has made provisions for dealing with adolescent angst but the midlife malaise is barely acknowledged except in jokes and snide comments.

While the dip in the curve is real, the book asserts that the upswing is equally real. It advices patience and suggests that the curve will soon turn for the better in terms of life satisfaction and general well being. It again dishes out some theories about why this is, including becoming wiser with age.

The book used Thomas Cole’s 1842 painting series titled ‘The Voyage of Life’ to illustrate some of the key themes. This is very cleverly done; I can see those paintings in a different light now.

The advice at the end of the book is a little ‘motherhood and apple pie’ but on the overall it is a thought-provoking and cleverly argued book.