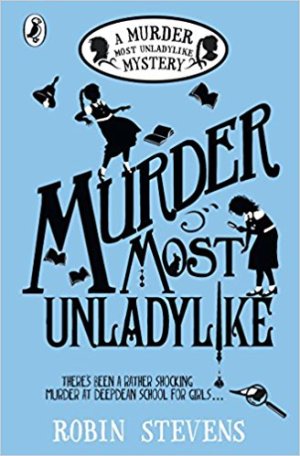 Daisy and Hazel are best friends. They are also part of a secret detective club which no one apart from them knows about. Unfortunately there aren’t very interesting cases at Deepdean school for girls. (unless you count the case of Lavinia’s missing tie which they don’t ) But a real murderer is in their midst and it has claimed its first victim: the science mistress Mrs Bell! Who is to blame? Will anyone believe them? After all they’re only two rather nosy pupils.

This thrilling debut has your hands super-glued to it. Every time I open the book I fill up with anticipation and I wonder what will happen next. One thing I must comment on however is how realistically the author has described the corpse of Mrs Bell. So I definitely think an age limit is a very good idea!  Perhaps 8-10?

My favourite character is Hazel Wong because she is writing this book in first person narrative and therefore you understand her feelings and how annoyed she must feel about the fact that Daisy always seems to be the one with the good ideas and all the luck.  Hazel can be a bit of a chicken sometimes but really she is just slightly jittery in scary situations.

Daisy on the contrary is a completely different person. You can feel her annoyance when on those rare occasions Hazel has a better idea then her. To be honest Daisy strikes me as a character who thinks rather a lot of herself. She seems to have all the teachers wrapped around her finger. She acts really daft in front of them and then amazes them when she gets a question right, rather like Ingrid Blammel from Poppy Pym and the Pharaohs Curse(I have reviewed that book earlier).  Also i have just realised that Robin Stevens has written the Guggenheim Mystery as well. That was a book i enjoyed immensely. I have bought the sequel to Murder Most Unladylike and will review it later

Have you read the thriller yet??