I had heard quite a lot about this book before I finally decided to pull it out of a shelf in a bookshop. But for me this book was a slight disappointment.  It took a while to get into, but steadily got a lot more grasping as the story carried on. The plot of this story was really interesting and I think the author has a brilliant sense of imagination.

This story is about Suzy a girl 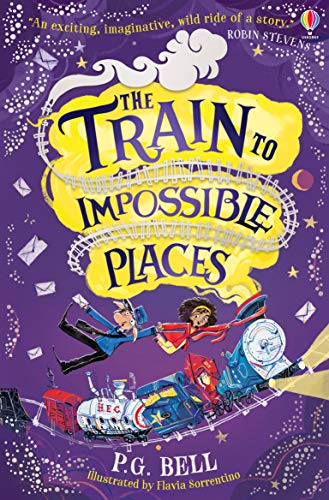 who, unlike the rest of her class, loves physics. So one night when she’s overdoing her home work again, she sees a luminous, bright green flash. It passes so quickly, though, that she carries on using up her the rest of her page, oblivious. But late that night she hears strange, loud noises, intruders. When Suzy hurries down the stairs to find out what is going on she finds something that she definitely did not expect… A troll called Fletch making railway tracks in the middle of her living room. Suzy as you can probably guess does not take to this calmly. She pesters Fletch for more information.

Eventually she finds out for herself by nearly getting run over by a train, also in her living room. This train is a delivery service for the Impossible Places where trolls live. The postal service is no Royal Mail though it doesn’t just deliver mail and parcels to people and trolls on land but also things under the water. Suzy is soon swept up into the adventure and becomes a good friend of Wilmot, the eager postmaster. Wilmot turns Suzy into a member of staff. But everything goes wrong when they go to deliver a parcel to the feared, Lady Crepescula. Suzy rescues a boy called Frederick in a snow globe from Crepescula’s dark castle. He has heard of a dreadful plot to overthrow the Impossible Places. Suzy must help him stop this foul play. Even if it means lying to Wilmot. But she is not the only one lying is Frederick really telling the truth?

Have you read it yet?