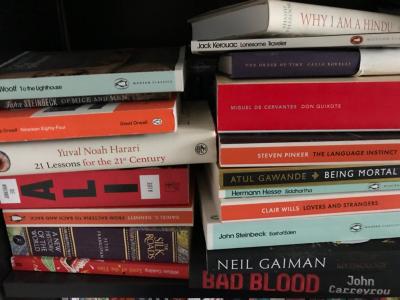 2018 is the year when I returned to reading. Over the years, I had allowed the habit to lapse; it was now not much more than a memory of a once-enjoyed activity. Too much of the occasional & intermittent reading had started happening only with a purpose – to read up an economic trend or to read up on something relevant for work or to read something because everybody else was reading it. All the fun had gone out of it. I rediscovered reading for its own sake in 2018. Admittedly, I had to use a crutch to get me back into the habit – I had resolved to read one book per week at the beginning of the year.

I did not finish one book each & every week but I did finish by 52nd book just around Christmas. I have thoroughly enjoyed what now feels like a well entrenched habit. I have enjoyed the process of ‘discovering’ a book while browsing aimlessly through a bookstore, the childlike thrill in finally choosing a book amongst myriad options. I have taken to buying books from Waterstones rather than Amazon. I have not restricted myself to any genres or even only to English. My choice of books has been pretty random – I have drawn inspiration from newspaper reviews, from old memories, from serendipitous browsing, from lists, from friends. I now check for the presence of a book before stepping out of my house – in the same way that I check for keys, phone and wallet. I have read books in multiple formats: paperbacks, hardcovers, ibooks, kindle on kindle, kindle on phone and kindle on ipad.

So what have I been reading this year? There is the entire list at the end of this blog; a few standout points below:

I began the year with mythology – Amish Tripathi’s Shiva trilogy is a quirky mix of Indian mythology, imagination and nationalistic pride. I enjoyed the books but was finding it a little tedious by the third book – not sure I will jump into the Rama Trilogy any time soon. Just before Christmas, I read Neil Gaiman’s excellently told stories of Norse Mythology. The similarities between the mythologies of the world are incredible: greedy gods that cheat but always win, clever & gentle giants/monsters that still end up on the losing side & enchanting daughters and wives who seem to be the cause of all troubles in the first place.

John Steinbeck’s The Grapes of Wrath is easily the most impactful book I read this year; its ending shocked me and stayed with me for weeks! The book is set in depression era California and Oklahoma and is a heart-wrenching portrayal of the impact of economic migration on an Oklahoma family. Tom Joad as the protagonist is a brilliantly crafted character. And this was less than a 100 years ago; a lot has changed in 4 generations but the change has not been without its victims. I also read Steinbeck’s Of Mice and Men and East of Eden.

I continued my foray into behavioural economics with Thaler & Sunstein’s Nudge and Thaler’s Misbehaving, after dipping my toe in the world of Kahneman and Tversky last year. This is a fascinating space and one to watch as it combines with everything from macroeconomics to artificial intelligence. Talking of trends, McAfee & Brynjolfsson’s Machine, Platform, Crowd is a good summary of trends that are all around us. I had read Yuval Noah Hariri’s Sapiens and Homo Deus last year; his 21 Lessons for the 21st century is more a collection of essays and thoughts rather than a coherent narrative, but his scholarship is without doubt and always thought-provoking

History is my first love when it comes to reading non-fiction. The fun in history is in its re-telling – from a new perspective here; a new interpretation there. Peter Frankopan’s The Silk Roads attempts to rewrite history in terms of humanity’s response to the ebb and flow of trade along the Silk Route. it is erudite and entertaining in equal measure. New Silk Roads by the same author is now in the book store and firmly on my reading list for next year.

A business trip to Argentina was a great excuse to read the slightly offbeat Angels with Dirty Faces: Footballing history of Argentina by Jonathan Wilson. Who would have thought, football in Argentina started on the sidelines of Cricket clubs started by the Brits to remind them of home. If the Brits had hung on to their imperial schemes in South America for a bit longer – imagine Argentina vs India in a cricket world cup final. But then historical ‘What Ifs’ is a fool’s quest. The book surely made for a fascinating trip to La Bombonera though I could not time my trip to watch the Boca Juniors live.

I had my share of business books too. I finally read Barbarians at the Gate by Burrough & Helyar, the story of Leveraged Buyout of Nabisco that shook Corporate America in the 80s. Very similar in writing style was the FT business book of the Year 2018 – Bad Blood by James Carreyrou – and tells the story of the rise and fall of Theranos along with its seemingly twisted genius of a founder, Elizabeth Holmes. Janesville by Amy Goldstein is also written in a journalistic style and accurately portrays the fate of a small town in the American midwest post the shutdown of its car plant; reality often lacks the neat resolution offered by fiction but then that is what it is – reality. Philip Augur’s The Bank That Lived a Little about Barclays history over the last 30 years is a wonderful read but probably speaks more to me because I have seen some of this play out live during my last 10 years with the bank. Dance of The Trillions by David Lubin is highly recommended for anybody seeking to understand emerging market macro-economics particularly the link between currency crisis and foreign money flow.

The 100 year life by London Business School professors Lynda Gratton and Andrew Scott is thought provoking – it illustrates the impact of all of us living much longer – on everything from social structures to personal finances. Atul Gawande’s Being Mortal tackles one of the implications of longevity – the need for a systemic and structured response to end-of-life care and comes up with some though-provoking ideas. His appointment in 2018 as CEO of the Buffett-Dimon-Bezos backed initiative to reduce health care costs in the US provides him with a great canvass to implement some of his ideas. Continuing the theme of medicine, Adam Kay’s This is Going to Hurt is a hilarious yet serious look at the experiences of a junior doctor in the NHS. I have often wondered about the motivations of nurses & doctors and what keeps them going in extremely difficult working conditions.

One Hundred years of Solitude by Gabriel Garcia Marquez  and Lincoln in the Bardo by George Saunders were probably the two quirkiest books on my list. Marquez’s story of the Buendia family spread across multiple generations is part magical fantasy, part historical fiction and part philosophy. Lincoln’s emotional response to the death of his son forms the basis of an engaging tale of spirits and sorrow. Both are unconventional in their writing style and completely different to each other in their themes and style – but equally evocative.

I read two biographies this year – incidentally both happened to be of Black Americans: Jonathan Eig’s Ali, A Life and Becoming (Michelle Obama’s autobiography). Though their lives eventually take very different paths, some of their race related experiences are very similar  – which is remarkable since they were born 22 years apart. Ali is an incredible character; there is so much more to him apart from the boxing – his politics, his religion, his foibles. The book is a great read; I followed up with watching some of his fights and speeches on YouTube. Michelle Obama’s book starts off very well but gets quite repetitive – particularly around the impact of her childhood experiences on her world view. The point is well made but made too often. I was expecting a bit more of the white house intrigue, a bit more from her foreign travels, a bit more politics.

I read two books with S, my 9 year old daughter this year: Adventures of Tom Sawyer and Pollyanna. Done at a leisurely pace of a chapter or half every other evening before bed time, this has become a ritual and one that I hope to continue for as long as she can stand it. I had never read the whole Tom Sawyer while growing up; some of the themes and descriptions (for example, the episode where widow Douglas is attacked) are quite brutal and I found myself replacing words or even entire paragraphs in real time while reading to her.

Above all, 2018 was a year for catching up on books that I have always wanted to read: 1984, Sidhartha, The Alchemist, A Passage to India, Heart of Darkness, The Plague, The Lord of the Flies, Death of a Salesman, To the Lighthouse. There is no particular theme in this mini-list; it is just an accumulation of titles, collected from now forgotten sources over the years but put off for some reason or another. It felt good to tick them off my subconscious list, only to realise, rather reassuringly – that the list is still very long

I read a novel in Hindi after more than 25 years and really enjoyed it. Dilli Darbar by Satya Vyash is not high literature by any metric, but I enjoyed the colloquial idiom and earthiness of reading hindi as it is spoken. I want to read more in Hindi and Gujarati in 2019. I was intrigued to see Vikram Shanbag’s Ghachar Ghochar (Kannada into English) get fair amount of shelf space in bookshops in London; the novella is an entertaining read.

Another pleasure this year has been watching movies after reading the books they are based on. And so I watched The Grapes of Wrath, Out of Africa, The Book Thief, A Passage to India, Death of a Salesman, The English Patient, Lord of the Flies, Of Mice and Men, East of Eden. I must say the only movie I enjoyed more than the book was The English Patient.

I left 4 books incomplete – either because I did not understand them after reading more than a hundred pages(From Bacteria to Bach and Back, The Language Instinct) or because I just did not enjoy it (Lonesome Traveller) or because I enjoyed it but found it just too repetitive, cumbersome & long (Don Quixote).

All things change. 2018 has been a year when I returned to reading. My hope at the beginning of 2019 is that this enjoyment I have found in books in 2018 stays around unchanged for at least a few more years. I will use this blog to chronicle what we are reading and our reflections on these books.

Here is my complete 2018 reading list in order that I read them: